My next appointment was arranged for when we were in Prague so I had to phone Mr X’s secretary and re-arrange.  This again is a wake up call as the NHS does not pander to your diary!  The next available appointment was the 7th November which was a week later than suited my timeline.

It did give me a chance to apply the GROWTH coaching model which I used in school to my medical situation.  One Saturday afternoon I sat down and sketched out the

Goal:  to remove the cancer;

Reality: the type of cancer;

Will:  I would request a double mastectomy and immediate reconstruction using acellular dermal matrix and an implant – great plan, positive psychological benefits and it looks good – I can argue the case, it makes sense one operation – problem solved.

Tactics: high protein diet to help healing, keep up the exercise and start mindfulness (last bit was a stretch as I couldn’t sit still long enough).

Habits:  keep avoiding dairy – be fit for any follow up.

I was so pleased with this plan that I typed it up, added diagrams and printed it out in colour.  Mr X was going to be impressed!  I continued to research the pros and cons of using this acellular dermal sling and found an interesting technique introduced by The University Hospital of South Manchester’s Nightingale Breast Cancer Centre which reduced potential problems with pectoral muscle detatchment.

Not only was Mr X  going to be impressed by my solution,he was going to be able to further impress all his colleagues by performing this amazing surgery – removing my cancer, introducing a new technique to Derriford and most importantly in my mind… a one stop shop for me.  Surgery done, cancer over – boom! 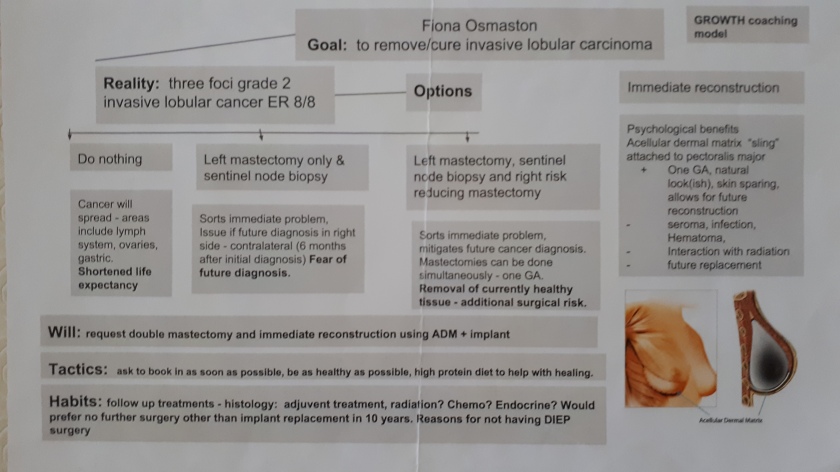 I was so pleased with myself that I virtually skipped to the next appointment.  As we were called in to meet Mr X I barely let the poor man sit down before my breast cancer folder was out and I insisted I talk through my plan.  He looked surprised and the breast care nurse looked very surprised.  I carried on.. pointed out the diagrams, the shape of implant and then the piece d’reistance… the research from Manchester (on an A3 sheet, also in colour with lots of diagrams).  There! Plan shared, lets move on and set a date.  Mr X folded up the A3 sheet and handed it back and said that it was obvious I’d thought about this – you bet! I felt very pleased with myself.  I did look over at the breast care nurse who looked agog and I said “don’t all your patients do this”.  It was a resounding “no”. Mr X gently told me that we needed to the “safest thing” which was the left mastectomy and biopsy and that we needed to crack on as I’d been let go long enough.

Safest thing, safest thing… were they ALL mad.  How could only removing the left side be the safest thing? Surely the cells and tissue in the right breast was the same as the left? Surely whatever had caused the cell abnormality in the left was lying latent in the right waiting to spring into action and cause more tumours and possibly escape into my bones or elsewhere.  It was pointed out that there was a multidisciplinary team which had discussed my case and that actually they did know what they were doing and I should go with it.

So much for the GROWTH  model.  The next step was to arrange a date, pre op assessment and nuclear medicine.  They would write to me.  I held it together as I left the office, walked out of the clinic and then at the stairwell floods of tears streamed down my face.  They continued all the way to the car, out of the sodding impossible car park, on the main road towards Tavistock to get some lunch, through lunch, all afternoon and evening.

Tip:  Don’t be surprised if your plan is not the same as the surgeon and multidisciplinary team.  Expect to not have control… it is a hospital not a school.