One of my jobs for the will they …. Dare to Bare Ball was to contact the media.  I’d had some success earlier on as I’d emailed BBC Spotlight, our local BBC outlet and they’d expressed an interest.  I’d also been using twitter and had generated some following on this platform too.  I had a tweet from Clare Woodling, a reporter and producer at Spotlight and she wanted to cover the story.  I was granted cover from school and went down to the Duke of Cornwall to meet her and the other ladies.

Clare and camerman Paul were lovely, they listened to the story, they asked us to rehearse with our feathers and then she interviewed us as a group, our choreographer, one of the other dancers and me.  This was on Monday 17th September.  They filmed us at the Duke of Cornwall for about 2 hours and she told us that providing there wasn’t a bigger story we would be aired on Friday 21st September the day of the ball.

We’d brought our dresses, M&S underwear and fans – we’d had a final dress rehearsal on the previous Sunday at the Duke of Cornwall… we’d been shocking.  We were off the beat, we couldn’t get it together at all… by the end of the rehearsal we were better but it didn’t bode well.  Claire and camerman Paul didn’t mind that we made mistakes and laughed whilst creating what looked like a flamingo massacre with our pink feathers.  It was really, really good natured.

On Friday morning (yesterday!) as I was getting ready for school and watching Spotlight in the background a flurry of pink feathers was spotted.  Clare had been as good as her word.  Her piece was funny and showed us in a great light.  There was footage of us rehearsing, of our choreographer saying… “at first they (dancers) were reluctant to take their clothes off, but now it is difficult to get them to keep them on”.  One of the dancers showed off the sequined dress and said how she’d never expected to wear something like this again.  There was footage of us all making fans and then I was shown basically saying the Ball was about body confidence.  It is very odd seeing yourself on the TV.

It was even odder being in school, as I sat in my office going through emails I heard some students say “We saw Mrs Osmaston on the telly this morning, she is stripping on it later”.   I could just envisage a call to come up to HR and discuss TS8 – Professional Standards!

At the same time BBC Radio Devon had been in touch and three of us had been invited to visit them on 4th October to discuss the outcome of the Ball. That morning Sally and Michelle, two of the dancers were also interviewed by Radio Devon.  Although I’d contacted the local newspapers there was no interest from them.

Our just giving page which had been pretty stagnant at about £350 exploded, by teatime it had reached £1000 and it currently stands at £1,400.  All the more for the Primrose Foundation.  From our initial aim to match what the real full Monty ladies made (£4,000) it looked as if we were going to double that or more! 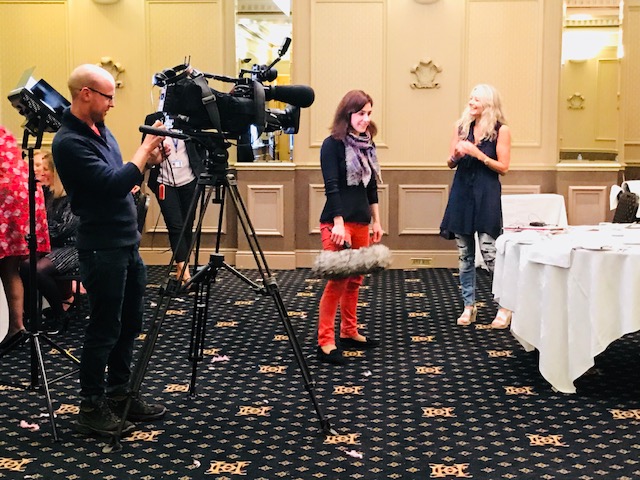